Backnang, 11.04.2018: Tesat-Spacecom established 10,000 connections between satellites using its Laser Communication Terminals (LCT). Tesat's LCTs transmit massive amounts of data at up to 1.8 Gbps over distances of 80,000 km in orbit. In addition, the company develops significantly smaller LCTs for Direct-to-Earth applications.

"When we introduced our groundbreaking technology exactly one decade ago, the goal was to transfer even the largest amounts of data between satellites in orbit and to establish the safest and fastest transmission," explains Matthias Motzigemba, Sales Communication Systems at Tesat-Spacecom.

The LCT135 from Tesat is based on homodyne binary phase shift keying and features bidirectional backbone technology and coherent detection. The terminal has a power consumption of 150 W and offers a very efficient solution for the long-distance transmission of data. The dimensions of the terminal are 60x60x70 cm with a weight of 53 kg. The LCT135 is in TRL9 (Technology Readiness Level) and has been produced 16 times.

"Currently, our laser technology is used every day for the transfer of important time-critical earth observation data which can be used for monitoring of our oceans, early warning of natural disasters and in support of other emergency services," said Motzigemba. The LCTs are mainly deployed on Sentinel satellites of the European Copernicus program or on geostationary satellites within the Airbus powered SpaceDataHighway. 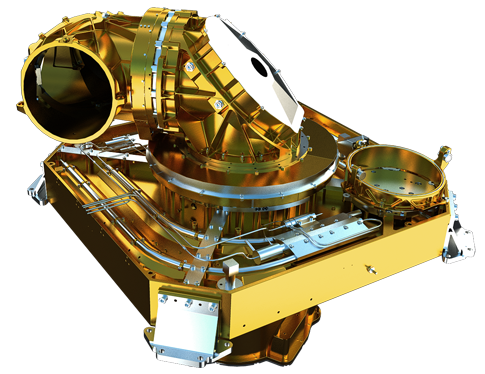 The CubeL has a power consumption of 8 W with a weight of 360 g. The module offers a data transfer rate of 100 Mbps. The TOSIRIS transmits 10 Gbps from smaller satellites to the ground. It has a power consumption of 40 W and weighs 8 kg. A special feature of these LCTs is the standard according to the CCSDS (Consultative Committee for Space Data Systems). Both modules send data over a distance of up to 1,500 km.

High security transmission
The data connection will be aborted If disturbed by another object. So, above all, Laser Communication Terminals by Tesat-Spacecom offer a more efficient and much safer technology than conventional radio frequency technology. The transmission by LCTs is able to support encryption via quantum key distribution method.

About Tesat-Spacecom
At Tesat-Spacecom in Backnang, around 1,100 employees develop, manufacture and distribute systems and equipment for telecommunications via satellite. The product range includes highly reliable devices such as travelling wave tube amplifiers, multiplexers, switches, modulators, as well as entire systems, payloads, and world leading, unique optical terminals for data transmission via laser. To date, far more than 700 space flight projects have been accomplished.

Media Contact
Nina Backes
Communications, Exhibitions & Fairs
+49 (0) 7191 930 - 1126
This email address is being protected from spambots. You need JavaScript enabled to view it.