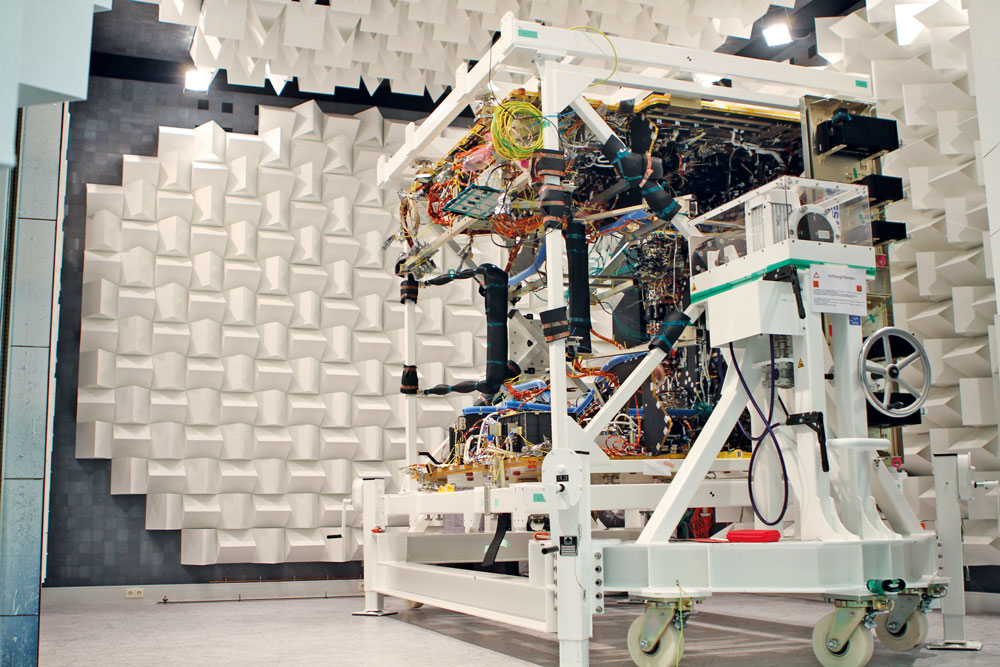 The SmallGEO platform has been produced by ESA, OHB and the Spanish satellite operator HISPASAT as part of a project to provide the Iberian Peninsula, the Canary Islands and South America with multi-media services. Tesat's share of this was the communication payload as well as a suitable automatic high-frequency measuring station for the complete integration and test phase.

The payload consists of a transparent Ku-band repeater with 24 channels as well as the Ka-band repeater with three channels. In addition there are two Ku-band antennas covering Europe and America, a controllable DRA antenna (Direct Radiating Antenna) and the Ka-band antenna. An OBP (On Board Processor) completes the payload. Special mention should be made of the MPMs, whose saturation output power can be changed via telecommands from ground and thus be adapted to the conditions.

However, it was a long way to go: in August 2012, the empty SmallGEO module from OHB arrived and all the individual devices for Ka- and Ku-band had to be integrated. The active direct radiating array antenna and the three reflector antennas were later mounted to the platform by OHB. Beginning in mid-2013, the intensive system tests started in Backnang and after solving of some technical challenges, the end-to-end test of the complete payload without the antennas could be completed in autumn 2013. At the end of this phase, it was moved to the large EMI chamber for the final EMC test. After the successful completion in December 2013, the repeater module from Tesat was handed over to OHB in due time.

After the mating of the repeater module with the platform, Satellite First Reference Test at OHB and the vibration test at the IABG in Ottobrunn followed. Starting in March 2016, Tesat began the most labor-intensive time with the implementation of the TVAC tests in Ottobrunn. The payload had to be fully tested in full vacuum and CATR. This was the first time that the behavior and the performance of the system could be observed and tested under outer space conditions. For over three months, our AIT colleagues worked at IABG in three-shift operation, producing more than 21,000 PDF test reports during this time with our test system, which were then evaluated by our system engineers on site and in Backnang.