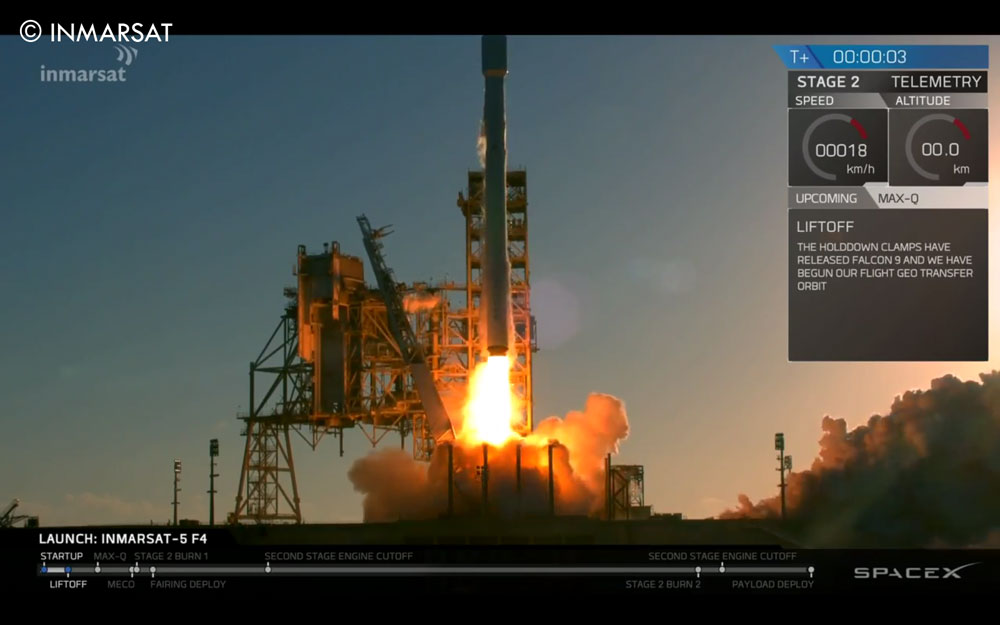 PI1281 – Backnang, 16.05.2017: When the countdown for the last of the four Inmarsat-5 satellites starts at the Kennedy Space Center in Florida, it is just after 1 am Central European time. The engines ignite, the rocket lifts off, and shortly thereafter: frenetic cheers. The launch of the Falcon 9 rocket from the US space company SpaceX under the leadership of Elon Musk has been successful and the valuable cargo is on its journey.

The situation around the newly launched satellite of the British satellite communications company Inmarsat is an unprecedented one. When usually the service life of a satellite is planned and its tasks are clearly defined, the fourth Inmarsat-5 has been built as a so-called backup satellite. Apart from its actual area of application – to stand in when one of its predecessors falls out – Inmarsat-5 F4 could be used for an improved coverage of Europe with mobile services. But also for new business areas, which could develop during the course of its life time, the new satellite could be used in short term and thus represents an exciting business opportunity, according to Rupert Pearce, CEO of Inmarsat.

Like the first three, the fourth Inmarsat-5 was commissioned at and manufactured by the US aerospace company Boeing. The German high-tech company Tesat-Spacecom from Backnang near Stuttgart was a supplier for significant devices and modules, which are of great importance for the processing of incoming signals and their further processing within the satellite.

You can find a video of the launch on http://www.inmarsat.com/i5f4/