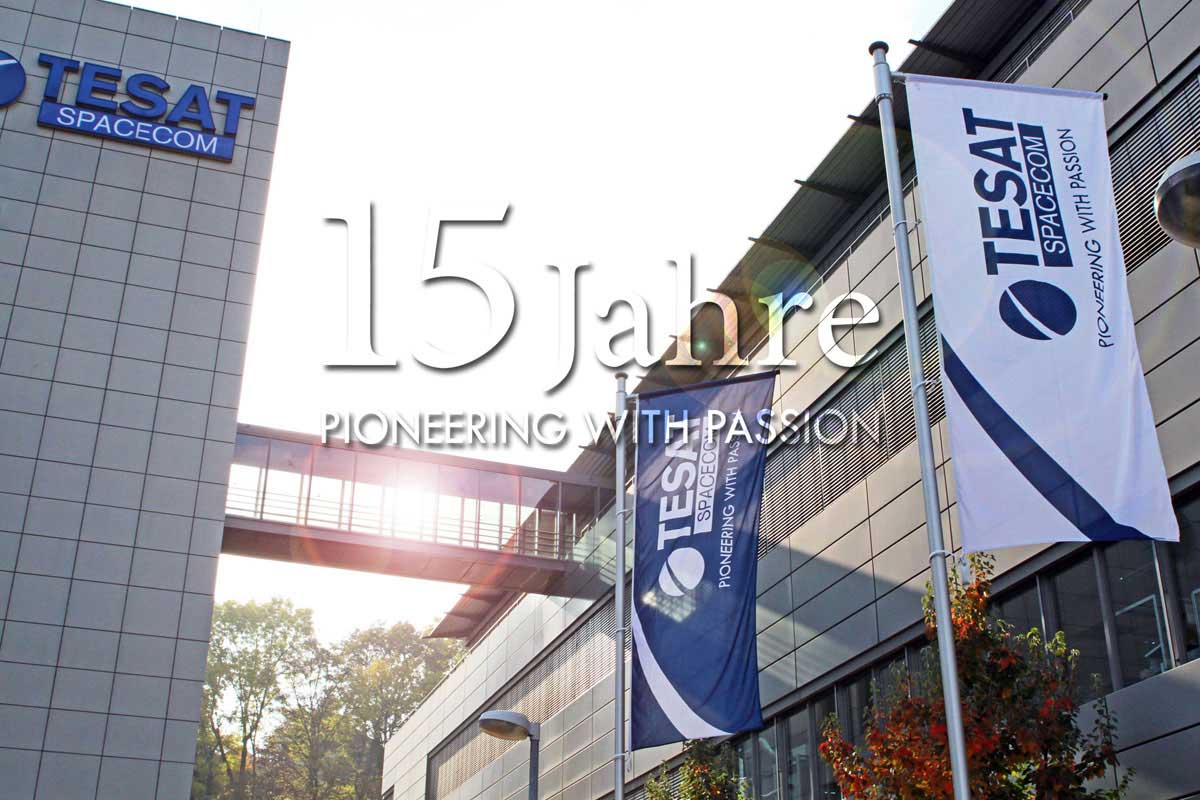 For more than fifteen years, Tesat-Spacecom from Backnang has stood for quality and innovation in space equipment. Fifteen years full of exciting developments, innovations, great milestones and the one or other big and small revolution in space. With pride one can look back on what has been created, and with pride one can look into the future, on what is still to come to us. With the self-confidence of more than 700 realized space projects and more than 250 million in-orbit hours, we expect this future with excitement as well as with enthusiastic curiosity.

Let us review the last one and a half decades: In 2006, we delivered the HP amplifier subsystems for the first Bundeswehr satellite. In 2007, we sent our first Laser Communication Terminal (LCT) on board the NFIRE into space and established in 2008 the world's first inter-satellite link with the TerraSAR-X. In 2013, we "manned" the Alphasat with our revolutionary laser technology and in 2014 we established the first satellite connection between a GEO and a LEO satellite – over a distance of a breathtaking 40,000 kilometers! The coronation of this era was the last year’s start of service of the SpaceDataHighway / EDRS (European Data Relay Satellite System), in which not only the LCTs for their satellites came from Backnang, but in the case of EDRS-A and EDRS-C even the complete payloads including hybrid relay payloads. This world-wide unique technology only enables the combination of laser communication and RF communication.

Apart from all these milestones, parts, components, modules and systems from Backnang have already traveled quite a long way. In the context of the OSIRIS REx mission to Bennu (a close to earth asteroid), with Juno on the way to Jupiter or with Philae and ExoMars to our red neighbor planet. Even the International Space Station (ISS) already had the benefit of Swabian high precision, which – within the Automated Transport Vehicles (ATV) installed – provided vital supply. Though less far away and yet pathbreaking is Tesat also in the application of additive manufacturing techniques for the production of microwave components – catchphrase 3D printing.

The nice thing about the sum of all things is, however, that you have known us for a very long time, without knowing this. Enable your GPS signal on the smart phone, switch in the comfort of your home from one TV station to the next, or find out about the weather at your holiday destination –you can rest assured that somewhere a part of Tesat-Spacecom is doing right now just that for you , what it should do.

At the end of this uncharming self-adulation, we can only say that we are looking forward to the next fifteen years of new challenges and opportunities, developments and innovations – and we are sure that they will come.